Ectoplasm is an as yet mysterious substance that is exuded from the body’s orifices.  It presents itself as a vapor or liquid that quickly solidifies and is molded into various shapes or forms.  These range from clouds in which images may appear, to disembodied limbs, to phantoms that walk among and converse with observers.  It is also subject to the psychological idiosyncrasies of individual personalities, and may at times be influenced by what Jung called the “trickster” aspect of our psyches.

WHAT IS ECTOPLASM MADE OF?

The medium Helen Duncan’s was said to form as a clear material and, very much like egg albumin when cooked, become opaque. An analysis of a sample was said to contain albumin. 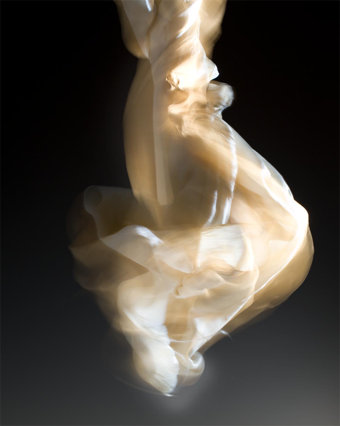 In a letter to the Journal of the Society for Psychical Research (JSPR) a member, Denise Iredell, described Duncan’s ectoplasm as a “milky substance spilled from her nostrils” that would ebb and flow “to and from the floor” and would “snake out across the floor to the ankle level” of the sitter who had been called. She compared it with “the movement and solidification of egg white which spills from a broken egg in a pot of boiling water.”

She reported that it concentrated and intensified into a “blob” between four and six feet above the ground but with a “misty substance swirling around the lower levels,” and smaller putty-like blobs, which formed on the head of the emerging figure and then refined into features.

Mrs. Iredell, later in her letter, noted that the “characteristic smell of ectoplasm” was “markedly present.” Curious as to what she meant I asked a gentleman who lived in London and knew her well, to find out.  He phoned her and, being a very conservative older person, was embarrassed to tell me that her response was “semen.”

I then mentioned it to another old friend, Arthur Ellison, a scientist and former president of the SPR and experienced researcher who had attended another (male) medium’s ectoplasmic-producing séances, and he confirmed that the odor was indeed similar to that of semen.

I guess that would make some sense since it is of organic elements from the body.

Some 19th century researchers analyzed samples of other mediums’ ectoplasm and found that it contained fats, proteins, and other natural substances found in the human body. Later researchers analyzed samples of the stuff and determined that it was made up of organic substances such as leucocytes, epithelial and other cells. They agreed that it was albuminous and resembled lymph and chyle but was not identical to them.

This was seen more clearly in Duncan’s séances. Her ectoplasmic phantoms would gradually sink into the floor or flow back under the curtains into the cabinet and thus back into the medium.

Maurice Barbanel, editor and friend of Duncan, described the shrinking size of ectoplasmic forms outside the cabinet, dwindling until they “resembled small globes of light” before disappearing as if through the floor.

In D. D. Home’s séances hands of many different shapes and sizes would materialize often ending at the wrist or elbow. Although they were quite solid they would dematerialize while in full view. Sir William Crookes reported that he held on to one hand as it gradually turned into a vapor and disappeared. The editor of the Hartford Times reported shaking hands with one of them. When the hand found that it couldn’t get away it yielded itself to him for his examination, turned itself over and back, then shut its fingers and opened them.  He then poked his finger through the hand forming a hole. The wound closed leaving a scar before disappearing.

A similar thing happened when in Crookes’ house; a Dr. Tapp attempted to take the phantom Katie King’s pulse. His fingers went right through her wrist.

Under Crookes’ test conditions in good light Home too produced phantom people.  A dark, shadowy, semi-transparent man was seen by a group of observers waving the window curtain with his hand, then fading away as the group watched. Another time a phantom form came from a corner of the room, took an accordion in its hand, and then glided about the room playing the instrument. Crookes adds that they could see Home, who always stayed seated in their sight in the room, at the same time.  When the phantom came close to Mrs. Crookes she gave a slight cry whereupon it sank through the floor.  This incident was described in separate reports made by Crookes, Serjeant Cox , the rev. Stainton Moses, and by Ellen Crookes herself.