As you probably already know, the term “poltergeist” translates from the German to “noisy ghost,” the term that persists today.  Unfortunately the belief that these disruptions are supernaturally caused also persists and “ghost hunters” laden with equipment rush to investigate or worse to exorcize the malevolent spooks. 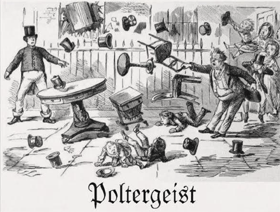 But legitimate psi investigators have done investigations of their own and we have learned a great deal about their psychological origins if not the physical/biological functions.  The late Prof. William (Bill) Roll coined the more scientific term Recurrent Spontaneous Psychokinesis (RSPK) to describe these sometimes mind-boggling events. It’s the one I prefer.

Gilbert Roller–the main force behind the Bindelof séance group—as a child on the brink of puberty, was the center of such an outbreak. As he related it:

My stepfather, Eddie Fink, was a basically warm, charming and lovable guy. He was a brilliant pianist who would sit at the piano in his pajama bottoms, with his hairy chest exposed and a cigar in his mouth, singing while he played. He was surrounded by women in his work and [my mother] Olga was away performing much of the time: Trouble was bound to develop. And, of course, Olga was a temperamental artist. My friends thought our home was wonderful, filled with music and art, and good times, but I remember the earlier times as monstrous and terrible.

There was considerable tension between my parents and violent fights: Mother had a temper that was absolutely without equal. She’d scream, “Oh, no you don’t!” and she would destroy a whole kitchen of china. The place would look like a battlefield, and Eddie would actually clean it up. I would of course become panicky. I would scream and yell. It was absolute madness. These scenes were frequent occurrences. Often, after one of these marital wars, Olga would take me and move out. It became a ritual.

One day, in the midst of this tumultuous life, when I was about 12 or 13, odd things began to occur at home. We would hear a soft “whizzing” sound followed by a “clink.” Upon investigating we’d find one of the hairpins Olga used to do up her long, luxurious tresses. These hairpins would be “thrown” from her bedroom, when no one was in there. At times the pins would be flung from the dresser at the door as someone left the otherwise unoccupied bedroom. We would hear them striking the back of the door and upon reopening it we’d find the pins on the floor behind the door.

Wooden knobs from shoe trees would be “pulled off” and flung across a room. We would enter the living room to find oatmeal scattered evenly over the rug. I was generally in the apartment during these occurrences but not always in the room where they took place. When I was not at home the phenomena were less intense. Olga tried to make light of it. We named whatever this force was “Liz.” We’d speak to it commanding, “Liz, throw something!” And, sure enough, “ping,” something would go flying across the room. It was exciting fun at times, but the manifestations became more violent.

Dishes would come crashing off counters or shelves. We’d return home to find the words “GO, GO” crayoned in huge–four or five feet tall–printed letters on the walls.

Some of the violence actually seemed directed against me. Once as I was walking in the street a milk bottle came plummeting down, crashing a few feet in front of me. Another time I heard a commotion coming from a wooden cabinet in which I kept my most treasured possessions including a shiny blue Lionel electric engine. The racket stopped abruptly as I opened the cabinet door. To my dismay I discovered the wreckage of my engine. It had been torn into pieces. Its body had been ripped away from the wheels; wires were dangling from it as from a disemboweled animal. It looked as if it had been senselessly attacked with a sledgehammer.

This time Eddie called in the well-known psychical researcher, Hereward Carrington, to investigate the occurrences. The tall, imposing Carrington regarding me with suspicion, went through my pockets, found some hairpins and a rubber band among the contents, and concluded that I was responsible for the outbreaks. What is more, nothing out of the ordinary took place while he was there, strengthening his opinion that “this highly emotional child” was most likely the cause. I was heartbroken. Not only was my favorite possession destroyed, but I was being blamed for these things that I hadn’t done (as far as I was aware at the time) as well.

BUT THEY CAN LEARN

My case, however, might have contributed to Carrington’s theories associating poltergeist outbreaks with puberty. In 1930 he was to write: “An energy seems to be radiated from the body… when the sexual energies are blossoming into maturity… It would almost seem as if these energies instead of taking the normal course… find this curious means of externalization.”

Whatever the researcher’s conclusions, relations grew even more strained between my parents. Although Eddie loved me, he felt that these were mischievous pranks: He couldn’t accept the “poltergeist” explanation. Olga felt, rightly or wrongly, that he had brought Carrington in to discredit her son. Their violent arguments escalated until Mother took “Liz’s” advice to “GO,” and went, taking me with her.

We rented rooms from some of my mother’s old friends with whom she had had successful séances in the past with some minor physical occurrences. Once settled, Olga persuaded these people to sit for a séance. For the first time I was allowed to participate.

Following Victorian tradition, we sat in a darkened room around a table. The room was hushed except for occasional muffled street noises. We waited in the dark room lighted only by the street lamps that filtered in through the heavy old-fashioned wide slats of the Venetian blinds. Suddenly the curtains at the closed window began to billow out as though blown by strong gusts of wind, and furniture began to slide away from the walls. A heavy, overstuffed easy chair came sliding toward us from a corner of the room. The landlords screamed and fled. That ended my first séance.

Writing on walls was a common feature of the RSPK outbreaks around Matthew Manning, whose experiences are well documented.  He was able to sublimate those forces into contact healing as an adult.

The “center” is often a young person who is frustrated, angry, thwarted in some way, but cannot act out.  I believe they must also have either overt or latent psi ability. That is definitely so in Gil’s and in Manning’s case. Manning wrote that his father rarely expressed emotion but that his temper could be “volcanic,” and that he could never be sure when it would explode or what might set it off.

The kinds of phenomena that occur in these spontaneous outbreaks are as numerous and varied as the personalities and psyches of those involved.  Usually household items are moved, “thrown,” or damaged. Eggs have been known to fly up to break against the ceiling, lights to flicker or bulbs to blow out, mattresses to be “pulled” off beds, sometimes with the occupant of the bed as well, stones to fall from ceilings or to pelt a house from outside, fires to spontaneously break out or water to appear from nowhere.

A WATER POLTERGEIST (RSPK) IN GERMANY

Eberhard Bauer of the IGPP (Institute for Border Areas of Psychology and Mental Hygiene) in Freiburg, Germany, wrote in Men and Women of Parapsychology, Personal Reflections:  Esprit, Volume 2, that with his mentor Hans Bender he investigated a “water” poltergeist.  It began in one of the small houses erected in the late 1950s.   Small puddles of water appeared first in the bathroom, then in the kitchen and other rooms.   The plumbing and heating systems were checked and no leakage was found. Then damp spots showed up on walls, carpets became wet although the structure was dry.  Pools of water appeared outside the house as well and the outer walls were found to be wet.  Experts could not find where the water was coming from.

Bauer writes: A dramatic escalation began on December 10th.   In intervals of 20-30 minutes, big water puddles appeared in the drawing room of the house.  The family—father, mother and a 13-year-old girl (we shall call Heidi) heard splashing when they were in another room. Again experts were stymied but ruled out trickery.

THE RSPK OUTBREAK MOVES DOWN THE STREET

At 7:30 p.m. neighbors of the next but one house came and asked for help because floods of water had suddenly appeared on the second floor and was pouring down the staircase, too copious to mop up. Helpers rushed there to help get the water out of the house and were still working an hour later when they were called upon to help with the neighboring house where pools and splashes or water had appeared and, another hour later, the same happened in the adjoining house, the last one in the row of houses.  This mayhem continued more or less intensely for three days.

Technicians cut off the water at the main in the first (Heidi’s) house, but water pools appeared nevertheless. Other experts were brought in, geologists, hydrologists, etc. and they finally advised the local authorities to apply to the Freiburg institute.

The Freiburg team interviewed witnesses, photographed the traces of the water damage in the different houses finding large spots on ceilings and walls and warped wooden planks on the parquet floors.  But from the beginning of their visit they were confronted with whispered hunches that the water disaster had to do with Heidi, the 13-year-old daughter of the first family that was affected.

They found that Heidi used to go to the bathroom in other houses.  In two cases it had been observed that a water pool appeared when she had used the bathroom. One of the families forbade her from entering their house again.

It turned out that the one house that was not affected was the one in which Heidi never used the bathroom:  Her family was not on good terms with the owners.

The Freiburg team concluded that Heidi was the cause of the phenomena and that her case showed “hints” of “urethral neurosis,” a syndrome characterized by a desire to dominate on the basis of an ego-weakness.  Of course neither they in the 1970s nor we in the 21st century yet understand the physics of these occurrences—as yet.

Excerpts from:
The Spirit of Dr. Bindlof: The Enigma of Séance Phenomena
Men and Women of Parapsychology, Personal Reflections, Esprit Volume 2